The strength of Enviroschools comes from its rich journey.

Initially developed by a group with diverse backgrounds including environmental education, sustainable design, Kaupapa Māori, and facilitation, Enviroschools has evolved and grown through the commitment of our partner network, and the creative input of now thousands of people around
Te Ika a Maui and Te Wai Pounamu, New Zealand.

The founding partnership of Toimata and Te Mauri Tau has held the kaupapa and evolution of both Enviroschools and Te Aho Tū Roa, enabling the innovation of holistic and empowering educational approaches in both English and Māori settings.

Within this context Enviroschools has grown from the seed of an idea to a nationwide movement. 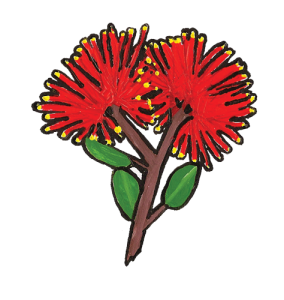 The seed of the idea

Enviroschools began as a small, seed-funded project in 1993, responding to the call from the 1992 Rio Earth to “think globally and act locally”. Initiated by members of the Hamilton Community Environmental Programme and supported by Hamilton City Council, Environment Waikato and the University of Waikato, three Hamilton primary schools trialled a number of projects to explore how to integrate Environmental Education into school life.

In 1997 Hamilton City Council employed their first Environmental Education Officer who led a team to fully develop the Enviroschools idea. Programme developers worked with a small number of enthusiastic and innovative schools from Waikato and Bay of Plenty, designing and trialled mapping techniques, experiential activities and student-centred decision-making tools.

Recognising the importance of integrating Māori perspectives led to a relationship with Te Mauri Tau – a Māori educational, environmental and health organisation based in Whaingaroa/Raglan. Through this core partnership came the development of the first Enviroschools Kit and facilitator training programme underpinned by five Guiding Principles and the Enviroschools Action Learning Cycle.

In 2001, with support from the Ministry for the Environment’s Sustainable Management Fund, the Enviroschools Programme became available nationwide.

As a nationally available programme Enviroschools moved from Hamilton City Council to be temporarily hosted by the National Association of Environmental Education (NZAEE), and in 2003 The Enviroschools Foundation was established. In partnership with Te Mauri Tau, The Enviroschools Foundation provided leadership and a strong organisational structure to build partnerships throughout New Zealand. During this period relationships were developed with a large number of Regional, City and District Councils, creating a strong support base to grow the facilitator network and bring new schools into the programme.

With an increasing strong support network there was huge growth in the number of participating schools. Regional networking events began to be developed and the first Green-Gold Enviroschools emerged and became role models for other schools. The programme began development into the Early Childhood and Secondary sectors.

Deepening and Extending into Community

The Enviroschools Kit was revised to incorporate the experience that had developed in the network.

The withdrawal of Central Government funding in 2009 created a challenging time for the Foundation, and the Enviroschools national team reduced its support to the regions. The size and strength of the regional networks maintained the programme until central government funding was restored in 2012.

With renewed central government funding a range of support services were restored to the regions. A multi-level evaluation was undertaken of the Enviroschools Programme nationwide, including the first Enviroschools Census in 2014 where 73% (646) of Enviroschools responded. This was the largest ever Environmental Education survey in New Zealand and yielded a wealth of information for all participants in the network.

A regional capacity building fund was initiated to enable inter-regional support and sharing and increase the ability of regions to provide wider support for Enviroschools in their region.

Enviroschools worked with specific regions on ‘frontrunner’ projects to develop innovative ideas that have potential to contribute to the programme nationally.

Toimata is a concept from Dame Katerina Te Heikoko Mataira, evoking ideas of creativity and craft, sustainability and vision. The takarangi design of the Toimata logo depicts all life nestled in the embrace of Ranginui and Papatūānuku and their love that flows to us here in the present, to all who have gone before and all generations to come.