Marion Dekker opened the event with a recollection of how the Inspired Kindergartens’ Enviroschools journey began, highlights and achievements along the way and included thanks all the kaiako and facilitators for their commitment to the kaupapa of Enviroschools. 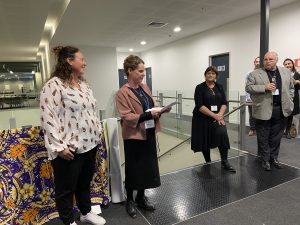 Katie Higgins, National ECE Enviroschools Coordinator, spoke of the benefit of having such a committed group of people paving the way for the early childhood sector engagement with the Enviroschools Programme, thanking the many people who had contributed to this. She said this Enviroschools journey has involved many teachers and respective communities along the way and has been amplified by the support and facilitation from some special people  – Pam, Kerry, Donya, Carolyn,  Gaynor, Caroline and Toia. The people at IK head office (Principal Peter Monteith, Head teachers Marion Dekker, Annette Rogers and Henare Gurney) have provided constant support, engagement, friendship and enthusiasm.

Enviroschools National Manager Esther Kirk (who was an Enviroschool Bay of Plenty facilitator near the beginning) was present to help reveal the 4 panels, unroll the banner and reinforce the importance of the value of strong partnerships and weaving the Enviroschools kaupapa through all learning.

Inspired Kindergartens (previously known as Tauranga Region Kindergartens Inc) was one of the first Kindergarten Associations with which a partnership to facilitate Enviroschools was developed. 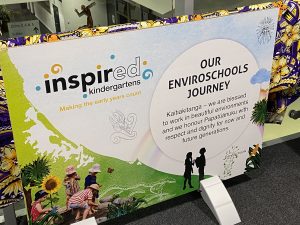 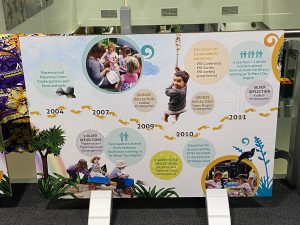 There are now 18 Kindergarten Associations throughout Aotearoa/New Zealand that partner with Enviroschools and many of these relationships are directly because of the leadership, innovation and inspiration shown from the trail-blazers at Inspired Kindergartens. They really do live up to the name Inspired!

You can read more about some of the mahi carried out by these kindergartens in our stories here and here and the ako journal.