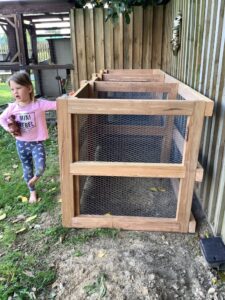 The bins will be an integral part of life at Te Puna Kindergarten.

At Te Puna Kindergarten in the Bay of Plenty the staff and tamariki were frustrated with their black circular compost bin that was very difficult to use. Tamariki struggled to access, and, because of its height, they couldn’t add scraps and weeds easily themselves. At another Inspired kindergarten they had seen an effective system with two wooden boxes side by side with slats at the front that could be removed to dig out the compost from the bottom. Once one side was full and needed to be rested before use, scraps and weeds could be added to start a new compost heap on the other side of the box.

“There is no waste in nature; nutrients move in cycles and one organism’s by-product is another creature’s food source.” – p 16 Enviroschools Zero Waste Theme Area Resource

Te Puna Kindergarten had wanted to do something similar for some time and the Earthwise Action Fund was a great boost to get it going. They decided on a 3 bay system that would allow proper compost practice – one box in use for scraps and other organic matter, one for resting, waiting for the natural decomposition process to take place and one fully composted and ready to add to fertilise the gardens.

Funding was used for timber for the structure and slats as well as and labour to create the compost boxes.

Now tamariki take the food scraps and put them in the compost bin alongside weeds from the garden. They are able to observe changes to the organic matter and watch the insect life activity. The easy access to the compost bin also allows tamariki to be active participants in looking after the compost systems and make conscious, sustainable choices when it comes to food. Conversations generated in the moment, encourage the use the specific vocabulary and the sharing of various working theories around this topic.

“Our gorgeous three bay compost bin has now been completed! Thank you so much to the Earthwise Action Fund for making this project a reality.” – Pam Hunton, Teacher, Te Puna Kindergarten 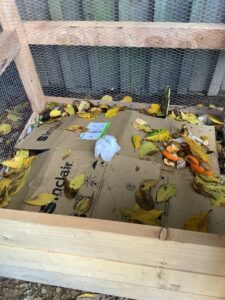 Setting up the bin with a good base of leaves and cardboard.