CONFESSIONS OF A NEW ENVIROSCHOOLS TEACHER 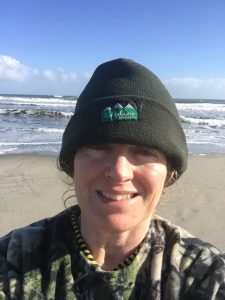 Rose O’Connor, Sacred Heart School kaiako, on one of her beach clean-up walks.

Previously, when I ran the beaches and tramped, I could conveniently choose to pick up rubbish or to pretend I hadn’t seen it. However, now, I find myself subconsciously picking up litter – I seriously don’t even realise I’m doing it. It has become that ingrained.

Our Enviroschools visit to the Westport Refuse Transfer Station also had a huge impact on me. The amount of rubbish we generate is simply horrific. The mountains of rubbish piled outside homes in Westport after the recent flood was soul destroying. You had to see the ‘Everest’ sized whiteware pile at the refuse station to believe it. Apparently, there was equally as much stored at the old cement works. I’m sure that it did not all need to be discarded and all I could think of was the harm it would do to our landfill and environment.

I have started buying shampoo bars instead of shampoo in bottles. I like the idea of using the entire product with nothing left over, especially an unnecessary plastic bottle. It seems kinder on my hair too!

I now check the recycling label before buying products. I just wish that the recycling emblem and number were somewhat bigger and easier to read! I am also far more careful to wash and correctly categorised my recycling ensuring that only glass is recycled and nothing else. I simply don’t want to be responsible for contaminating a recycling run.

I am also much more committed to composting. I was a lazy composter and if it was raining or I couldn’t be bothered, the scraps would just go in the rubbish bin. However, now I have a separate compost bin, I don’t use bin liners, I rip up cardboard and paper and compost that too. I put layers of ash and old fern fronds to separate the food scraps which has made my compost far healthier. I am creating less household rubbish.

I am attempting to educate my teenagers. While the daughter has ‘got it,’ the 18-year-old son has some way to go. It looks like I will have to set something up in his flat next year, given that six male Lincoln University students seem unlikely to do it otherwise! 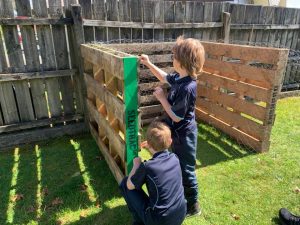 I also think that because I have made big changes, the children in my class are also more environmentally aware. Hopefully, we are empowering our next generation to be more environmentally proactive. During lockdown, I posted a video of me at the beach. One of the parents said her five-year-old son immediately said that I would have been picking up rubbish! He was right!

So, without a doubt, I am more environmentally aware than I was previously. I am definitely on a journey and once on it, there is no going back. 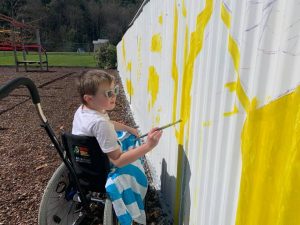 Jaxon Hill is helping to paint the refreshing mural celebrating 1 year as an Enviroschool.

Banner image: The wall story after visiting the Transfer Centre.