Pakuranga Baptist Kindergarten’s journey to becoming a ZERO Waste Enviroschool – A short summary of a significant journey to change a community’s behaviour around waste.

Where have we come from?

Three years ago, Pakuranga Baptist Enviro kindergarten kaiwhakahaere Jacqui Lees (who personally lives a nearly waste free life and puts out her own bin once a year) thought they were doing all they could do at the kindergarten to minimise their waste to landfill. Food waste went in the compost, bokashi bin or worm farm, tamariki used colouring pencils and water colour brushes instead of felt pens for art, newsletters and invoices were emailed to parents, they made their own cleaning products, and recycled all they could. The one issue they believed was impossible to overcome was disposable nappies going to landfill.

Two things happened that changed their minds. First in 2015 the worm lady, Amber, visited bringing her worm suit to teach the children more about composting worms. Without much conversation, she went through their rubbish bins out in the car park then challenged them to improve their sorting and gave them tips on how to improve the health of the compost and their worm bin. Jacqui said this challenge was the wake-up call that she needed to take a serious look at reducing their waste. They worked on this as a team, changing from paper towels to cloths, changing their cleaning products to steam cleaning, refusing to purchase items that brought waste into the kindergarten and examining all other waste to see where they could have further impact – and through this were able to reduce their waste by almost 60%.  Then in 2021, their Enviroschools facilitator invited them to participate in Howick Schools Waste Minimisation Project to further reduce waste. Jacqui was initially slightly sceptical, thinking they had achieved the most reduction possible. However she registered and did an initial waste audit. It confirmed if they could divert disposable nappies from landfill, they could further reduce their waste by 40%.

The team at Pakuranga Baptist Kindergarten courageously set a long-term vision of zero waste. They planned to divert disposable nappies from landfill and applied for Howick Schools Waste Minimisation funds to purchase reusable nappies. They attended a Kate Meads (“nappy lady”) workshop where Kate talked about small steps and how even if they could use just one less disposable nappy per child per day, they were making good progress towards their goal.

The teachers listed all the barriers. The most significant was how to reduce the impact of using reusable nappies on working parents and make it easy for them to change. They chatted on the ECE teacher Facebook page with Emma-Jane Jones (who runs Nga Taonga Aroha, an ECE in Ōtara) and came up with plans to help overcome these challenges.  Then they created a complete support system process for diverting disposable nappies from landfill.

Below are the actions Pakuranga Baptist Kindergarten are taking, they: 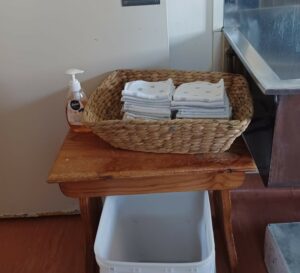 Cloth towels next to the basins, available for tamariki to dry their hands.

As well as using reusable nappies and getting children toilet trained, they avoid wet wipes as they never break down and clog up the wastewater plant in Mangere, costing millions annually. Instead, they use washable cloths for wiping bottoms, and toilet paper if necessary. Tamariki use small individual washable cloths decorated with stars and hearts for drying their hands and actually prefer this to paper towels. Staff and tamariki use different coloured washable cloths for washing dishes, cleaning the kitchen, bathrooms, tables, and floors. All these cloths are washed separately and at different temperatures.

In May 2021, when they did their second waste audit their results showed they reduced their waste to landfill by 98 % by getting tamariki out of disposable nappies. This spurred them on to become a zero waste kindergarten, and to cancel their kindergarten rubbish bins.  Jacqui reasoned that if they had no rubbish bins, they would have to really focus on getting to zero.  This year they again thought carefully about all their daily choices of how they could further minimise waste. They kept evaluating their progress and making more refinements, always focusing on educating parents about their actions and why.  One action they tried was to get tamariki to bring and use handkerchiefs, however children kept dropping them. So they went back to using tissues, but these are now composted. They purchase loose-leaf tea, and make their own crackers when they go out for a picnic. One challenge that many schools and ECE’s are still facing is how to get plastic wrap from children’s lunch boxes. 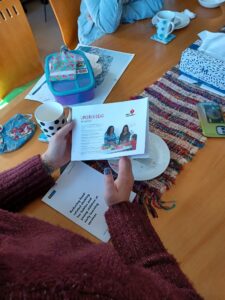 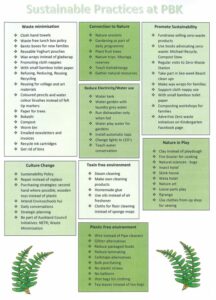 Pakuranga Kindergarten models actions, leadership, and commitment to being zero waste and they show how that motivates everyone. They have everyone onboard knowing that creating landfill waste is wasteful of our limited resources and guess what? Everyone knows their actions count. They feel proud all waste is being diverted from landfill. To help everyone know and understand their zero waste strategy the team have put together a sheet of sustainable practices. 2022_ES_Auckland_Pakuranga Baptist Kindergarten’s Sustainable Practices

Pakuranga Baptist Kindergarten demonstrate if they can achieve zero waste by making plans and small taking actions that involve deliberately educating everyone, getting to zero waste is possible for all of us. Others are watching and learning from them and recently Jacqui hosted Te Kōhanga Reo Ki Puhinui teaching team who left eager to get their babies into reusable nappies and get their worm farms up and running! 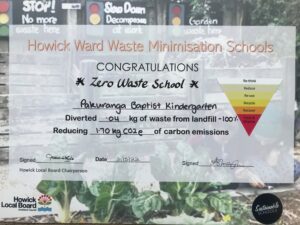