Laying down the challenge

The Hawke’s Bay Secondary Schools (HBSS) Environmental Challenge was an idea that came about when deciding on an initiative for our Youth Environment Council (YEC) members (made up of secondary school enviro leaders) to take back to their school and generate change in their school environment at the beginning of 2022.

The initial concept was to run the challenge with the YEC but, with only 6 of 26 local secondary schools represented on the council, it was decided to open the opportunity to all HBSS. 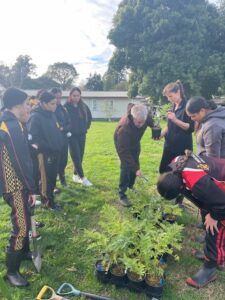 The challenge brief was for all Hawke’s Bay Secondary Schools to plan and implement an environmental initiative that supports their school setting. Those that were interested filled out a registration form online and Environmental Education team contacted the student and lead teacher to meet with the enviro group and talk about the challenge. Each school was then supported through termly facilitator visits and help with their required Enviro Challenge progress reports. Eleven secondary schools signed up in term 1 which we thought was a pretty good turnout for its first year running. We currently have 8 schools still in the challenge and doing some awesome mahi.

A few of our schools are focusing on recycling systems and composting, and one is looking at eradicating pests, having set traps. A couple of others are involved in planting natives including the locally significant kākābeak/ngutukākā. Havelock North High School has implemented a school-wide edible garden competition while another school is exploring smart solutions in recycling disposable masks.

Students have got creative in their thinking and have initiated some exciting sustainability projects to improve their school environment including fundraising initiatives like clothes swaps, car washes and bake sales to fund their projects. These projects are student driven with a lead teacher supporting.

The enviro group at Havelock North High School (HNHS) decided on a plant growing project at the end of term 1 and didn’t have much of a game plan but quickly came up with initiatives to raise funds for their project. They held a bake sale and second-hand clothes shop at their annual ‘Havestock’ event, and this has resulted in each of their 40 form classes looking after an edible plant during term 3. 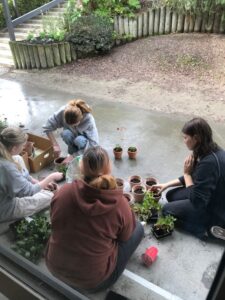 Getting the plants ready for distribution.

When we met with the enviro group recently, they were telling us how the plants in their form classes are causing quite a stir at school with a lot of banter and competition. There have been videos and messages circulating of classes singing to their plant and one plant being put up high in a classroom to get the best morning sun. Another plant is being given artificial lighting to support its growth, much to the displeasure of other classes. There has even been an investigation lodged with one class whose plant pot had been broken. Others were concerned that they were penalised because of the different growth rates between silver beet and spinach. Plant memes and puns are circulating amongst the teachers!

The enviro group mentioned that this initiative is adding a great level of positivity amongst its student body and teachers and is helping the enviro group have more of a “presence” at school.

It has been a lovely surprise that the project has inspired more school spirit and is having a positive impact in their school community. The plant project has a couple of competitions running during the term, with form classes naming their plant and decorating their pot which adds to the spirit of the project and form classes feeling proud of their class plant.

The idea going forward from this project is that at the end of term, the plants will be transferred to the school garden plot for food tech classes to make use of the plants in their cooking as well as sharing with their wider school community.

The lead teacher at HNHS is happy that the project has been student driven but this did take some getting used to on her part, as she had previously had to drive this group but says she hasn’t needed to recently as the students have stepped up and made it happen. She has just organised a classroom for them to meet regularly. To see such a turnaround from a bunch of students who were uninspired at the first meeting to being spirited and confident is quite something. 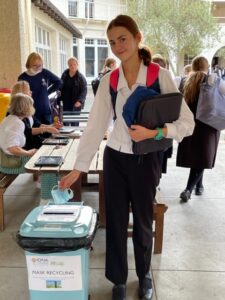 Iona College introduced recycling face masks an Enviro Challenge project. This developed quickly to include collecting soft plastics, not only in their school but also out in the community. The masks and soft plastics will be sent to Future Post who will recycle the plastic waste into materials for raised garden beds for the school. The plan is to use these new beds to plant herbs, fruit and vegetables starting in 2023.

This project has got other departments at school starting to think about how they could do things in a more sustainable way with engaging conversations that help raise awareness taking place in the staff room.

The project has caused a ripple effect in the school, as the enviro group, who call themselves ‘grow getters’, had a few different enviro initiatives on the go and have now managed to tie it all together under the one project. The students mentioned that they’d “just kind of been doing projects here and there without much traction”, but doing the HBSS Enviro Challenge has been positive, as they feel like their efforts are being recognised. Completing the term progress reports has helped keep the project moving forward and the “grow getters” thinking more creatively about what they can do in the enviro space at school. 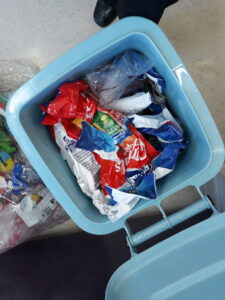 The 2022 challenge will culminate in a celebration that will see a panel of judges including the YEC representatives provide feedback to participants and showcase achievements. There will be an award that recognises Hawke’s Bay Secondary Schools who have planned and implemented a sustainable environmental initiative that supports and/or enhances their school environment and wider school community.

The winner of this award will demonstrate:

Reflecting on the Challenge so far

This Enviro Challenge initiative has been effective in “opening the door” and getting to meet with lead teachers and enviro groups at secondary schools in the region, including those we hadn’t had a lot of contact with. This has subsequently resulted in having more represented on our YEC. It is great to be able to support our local secondary enviro groups and lead teachers.

It has also provided an opportunity to see the mahi being done in some secondary schools, reflect on this and celebrate that with them.

It was a challenge in itself, coming up with this challenge on the go and changing tack when needing in order ensure success.

A lot of support with progress reports was needed and given the busy nature of Term 4, the challenge would be better wrapped up before ethe end of Term 3.