Lincoln High School (LHS) has a Sustainability Council which is led by two year 13 students and is comprised of students who are passionate about the environment. This small but motivated group has grown in number and enthusiasm and started off 2021 with much to add to their school goal of improving the school environmental sustainability.

The council members were motivated to provide an area of greenery for students and promote biodiversity in the school, but unfortunately the school had very little funds available. Because of this, they applied for Earthwise Action funding and were over the moon when they were told that they had been awarded it.

The aim was to develop an eco-area at LHS to promote biodiversity, act as a carbon sink, promote student wellbeing, and allow native plants to grow, which would be useful for students, particularly those potentially utilised by the Māori department. This project is not yet finished as there were delays, including plans being lost, multiple changes to a planned school rebuild (meaning our initial plans wouldn’t work as they would have been bulldozed), covid restrictions, and a lockdown. These complications also meant that unfortunately we didn’t have enough time, space or money to complete the nursery part of the project, but all these challenges contributed to the learning opportunities for the Sustainability Council. A large part of our aim was to encourage students to be involved with every stage of the project so that they would take more ownership of it, and so it was very encouraging to see them continue despite facing these multiple setbacks. As a result, they have created a space that they can be very proud of.

Firstly, students chose the plant species in consultation with our Kahui Ako cultural narrative written by local rununga (Te Taumutu). They wanted large trees that would be sequestering carbon and chose tōtara (which used to grow in the area), kōwhai for its bird attraction, harakeke for birds and for the Māori department to use for weaving, and a mix of other plants useful for attracting invertebrates. They also wanted to use locally sourced seedlings. One great aspect of this was getting some plants donated from Ladbrooks Primary School, who had grown them from seed in their own nursery. This opportunity fostered further connections between the two schools.

Lincoln High School Eco-Area landscape plan drawn up by a student and presented to the Property Committee.

The Yr13 leaders then presented their proposal to a representative of the school property committee to approve the project. There were some delays as we ironed out details they needed, and as further changes were made to the school master plan. After final approval in September, we then sourced sponsored materials from local suppliers to bring down the cost, and in the case of the plants tried to make sure the seeds were locally sourced from locally endemic plants to ensure maximum biodiversity value and genetic continuity. 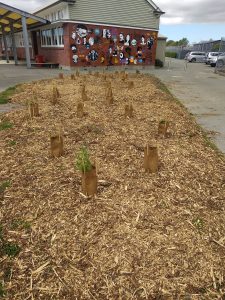 In the term 3 break the students planted the shrubs and trees in a rush in the rain just at the last viable time for planting, but unfortunately before we’d been able to secure all the materials for the rest of the project. This meant that the junior students got the chance to take the lead after seniors had left for the final stages of this project which are still underway. Students worked hard in lunchtimes (around rain), putting in edging and more weed protection.

As a teacher, I’ve been particularly impressed by the mahi of a small core group of yr9’s. Also under construction is a bench seat to go inside the area, with a group of yr10 boys gaining a great experience at carpentry with help from the Lincoln Men’s Shed. This is an amazing opportunity for students who love hands-on learning, to be mentored as well as make something that is going to be in place in their school long after they leave.

Once the plants have grown up it will create a haven for students and biodiversity with opportunities for monitoring by science students as the plants progress. The aim is also to intentionally place invertebrate monitoring stations/habitats including wētā hotels and old logs.

In total, 30 students have researched plants, sweated in the sun and been soaked in the rain to contribute to this project, learning practical skills and learning what is involved in successful regeneration of biodiversity. This was only possible through the generosity of the Earthwise Action fund. The students are very proud and are excited to see the space develop so to be the calming greenspace that they aimed to produce. They will also be watching carefully to see the tōtara and kōwhai grow and stand tall for decades, sequestering carbon along with all the shrubs and grasses. What a great learning opportunity! 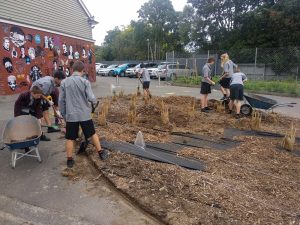 More of the LHS Sustainability Council at work before stage 2. 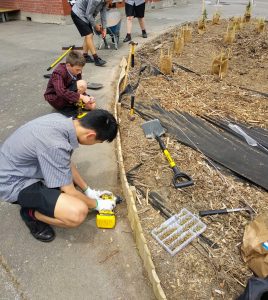 The start of stage 2 – edging the area before putting in the seats.