Enviroschools > Creating Change > Our Stories > Let’s Get Blitzing!
« BACK TO ALL
Learning for Sustainability Living Landscapes 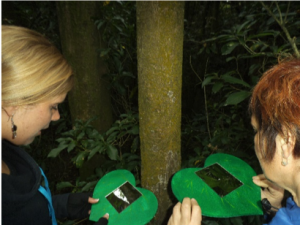 Teachers using mirrors to view the canopy at an Enviroschools cluster meeting.

The seed for the Lincoln High School bioblitz was planted during a Selwyn Enviroschools cluster meeting that focused on using local nature reserves as outdoor classrooms.

An attending Year 10 Science teacher from Lincoln High School was keen to strengthen the Nature of Science Achievement aims – particularly ‘Participating and Contributing’ across the 5 Science Capabilities.

A bioblitz was a clear solution to engage students and support their learning in the natural classroom.

A bioblitz is a communal, citizen-science effort to record as many species as possible within a designated location and time period.

Lincoln High decided to utilise a modified version of the iNaturalist (a website where you can share with other members what you see in nature) Bioblitz platform.

Bioblitzes are great ways to engage the public to connect to their environment while generating useful data for science and conservation. They are also an excuse for naturalists, scientists, and curious members of the public to meet up in the great outdoors and have a lot of fun! 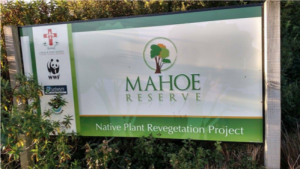 Mahoe Reserve proved to be an ideal location for the bioblitz.

The Mahoe Reserve restoration project was originally developed with Year 9 students back in 2002, and the management of the Reserve is now in the hands of Lincoln Envirotown.

Lincoln Envirotown’s organisational objectives include ensuring that the Reserve is used as an outdoor classroom where students can lead action to improve native biodiversity. 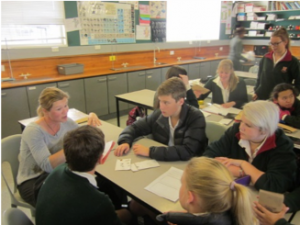 Herpetologist Chris McClure shares her passion for reptiles to the ‘Lizard
Group’.

A partnership approach was adopted and environmental experts were invited to speak to students in the classroom. The experts shared their roles, field work skills, monitoring tools, and the wider context behind their passion and career choice.

This was followed by a second session at the Reserve, where students practised fieldwork skills. This built up the students’ skillsets and exposed them to a range of areas – such as pest trapping, aerial weed monitoring, wētā motels, and lizard habitats – to help nurture their different interests. 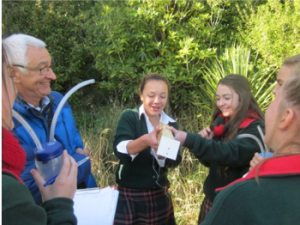 Members of the ‘Invertebrate Group’ tentatively check their Wētā Motel for
inhabitants under the guidance of Entomologist Mike Bowie.

The students then picked an area of interest and developed a longer term monitoring strategy using their newly honed field work skills. After a few weeks, the groups and experts came back together and shared the data they had collected on iNaturalist to future proof their project.

Using their monitoring data, the students developed actions, which then developed into proposals that they presented to the Lincoln Envirotown Mahoe Reserve Committee. 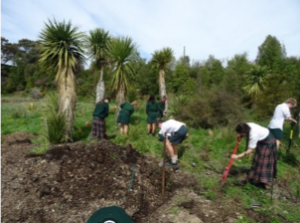 The students actions ranged from building a hedgehog proof lizard area, where both skinks and predating hedgehogs had been detected using tracking tunnels, to running a trap line and trialling a Borax weed killer for Convolvulus.

The final step of this project was gathering feedback from the students – and they had suggestions for improvement! 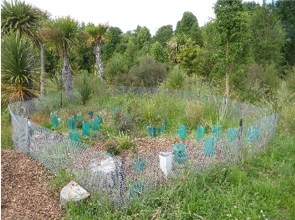 A project overview with learning intentions, curriculum references and timeframe, planning, proposals and the student feedback are available on request: Matthew.stanford@enviroschools.org.nz