Recently students from 2 Christchurch Enviroschools (Heathcote Valley and Waitākiri) spoke to their submission on the Christchurch City Council’s Draft Waste Management and Minimisation Plan. Students from both schools had a really good prior knowledge of the issues around waste management and effective practice in reducing waste through their school and home learning. With guidance from Enviroschools Facilitators and their teachers they were able to express their concerns about some inefficiencies of the draft plan and provide constructive ideas for addressing these. 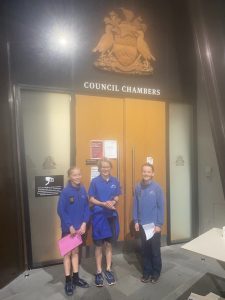 The creative trio at Heathcote Valley School had some great thoughts on how to minimise waste. Ideas included videos on how to make compost bins, collective composting areas in suburbs, bigger organics bins, incentivise litter free lunches in schools and even a scheme to get creative about re-purposing or eliminating problem products – phew!

“A suggestion we have is that packs can be sent to communities who want to run waste learning programmes. Then this new knowledge could be shared wider e.g. into the schools and Early Learning centres in the areas too.” – Heathcote Valley School students’ written submission

“We think recycling bins should be see through so that people are accountable for what they are putting into their recycling bins. Also, this will mean the drivers can see what is in them and if they should be collected – so less being contaminated and going to landfill. Restart soft plastic recycling. We think community/street/small areas e.g. rest homes, schools should all have access to shared compost areas and community gardens.” – Heathcote Valley School students’ written submission

When asked in the written submission about whether they thought the Draft Plan does enough to move towards zero waste and a circular economy, the Heathcote students responded: We feel there is not enough in here about the action taken to achieve these goals. We like some of the ideas especially about companies being more responsible for their actions. Overall, the Heathcote students were in support of the Draft Plan and also had a number of ideas to share. They suggested creating a website that residents can comment on about materials like pens and glue sticks and how to ‘return to sender’ when used or to be reused. Grants/subsides given to small businesses or people wanting to create ways to support being zero waste and circular economy. They mentioned that they were really lucky to be an Enviroschool and wished that funding was available for all schools who wanted to join the programme.

Reflecting on their experiences

Lena – For the written submission it was quite complicated to think about how to be interesting- tricky to refine ideas in a way that other people would understand.

Holly – You had to make it flow well, we had all these ideas so they had to be put together to make sense.

Lena – There was not a lot of space so we had to break thinks down to write the main points.

Speaking to their submission at the Christchurch City Council Chambers

Amalia – Nerve-wracking. It was more formal than we were used to. The groups speaking before us mentioned us as ‘the future’…

Holly – Scary. It was scary speaking to someone so important! Adults were speaking before us. We were the only kids so we felt we had to set the standard quite high. I didn’t even know there was a council chamber.

Lena – Such a big room! They were quite official, but they listened well, so felt we had better say interesting things! I didn’t even know where the council was. I thought it would be in a small office not the big hall!!

Messages to others thinking about submitting:

Lena I would encourage other kids to make a submission to make their voices heard.

Amalia When it comes to environmental related issues, I have noticed that adults listen to children more.

Lena They listened to us more than the other adults submitting

Holly When we spoke, the councillors were more interested and excited as we were called the ‘future’. They lent forward. I guess we were a different voice and different perspective…

Lena …Yeah, it must be pretty boring sitting there listening to the submissions all day…

Holly …so when children speak it’s something a bit different.

Lena the way kids talk about it is different, maybe easier to understand- so easier to get your key points through.

Wāitakiri Enviro Ferns members Lucy, Makayla, Mehakpreet, and Willow set the scene by explaining that their school was a Green-Gold Enviroschool and they wanted to increase the influence their community by sharing their ideas.

“Here are a few things we do at Wāitakiri Primary School to reduce waste. Friday stalls where we sell homemade products like beeswax wraps, soap, lip balms, vegetable and fruit bags. Using Beeswax wraps is important to us because it doesn’t use plastic and it can be reused to wrap sandwiches, cover jars, wrap around cheese and other foods. Our items that we sell use natural products and are homemade. In all our classes and offices we use goos paper which stands for good on one side.” – Wāitakiri students’ speaking to their submission

“We give all New Entrants a NOOD Food lunch box when they start school and we ask the parents to support our no packaging policy. Our Choices Cafe has reusable keep cups that are available to purchase. We also have a cup library from which you can borrow and return the cups. We have a Pataka kai which is a food pantry where we share food with our community. We encourage people to take what you need and leave what they can. We do local community clean ups at Horseshoe lake, Travis wetlands and Clare Park”. – Wāitakiri students’ speaking to their submission

The students explained that they had been talking about what actions we could achieve to reduce waste in Christchurch to reach the goal of being waste free over a couple of weeks and come up with some suggestions. 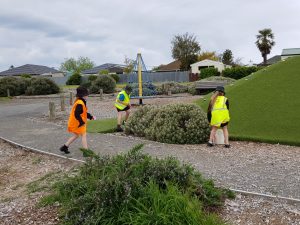