A beautiful Māui dolphin artwork, gifted to Enviroschools by Dame Tariana Turia, has become the Enviroschools Te Upoko o Te Ika a Māui Taonga o Kaitiakitanga. This Sheyne Tuffery print has made an impact as it has travelled from Enviroschool to Enviroschool in Te Upoko o te Ika a Māui/Wellington Region, honouring work the schools and centres have done, developing connections between those in the network and providing a catalyst for new learning.

“To be given such a sacred piece of artwork means a lot, due to the love and respect that goes with it. It signifies the importance of environmental change and inspires us to keep going.” – Bree Renwick, Kāpiti College Yr 11 student in 2017

An artwork with a message 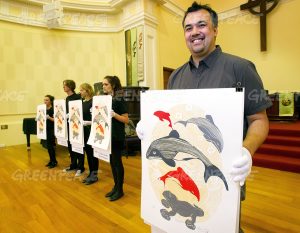 In 2013 Greenpeace commissioned local artist Sheyne Tuffery to create 55 Māui dolphin prints and presented them to 55 politicians, including Dame Tariana Turia. This was part of a campaign to encourage politicians to make urgent policy for improved protection of our endangered Māui dolphins, by banning net fishing throughout their habitat to a 100 metre depth (as advised by international and national experts).

At the time there were only 55 Māui dolphins remaining. Since 2013 there has been a small increase in numbers to 63 in 2021, but the species is still on the brink of extinction.  To learn more about the Māui dolphin, and what you can do to help ensure survival of the species visit WWF-New Zealand

Sharing the message among young people

As the recipient of many gifts, Tariana chose to pass the artwork on to Enviroschools to share it more widely with young people in the region. The artwork is now passed on annually from Enviroschool to Enviroschool, in the season of Matariki, recognising the role young people play in modelling kaitiakitanga. The intention is to recognise the mahi taking place, and to connect communities through the plight of the Māui dolphins. 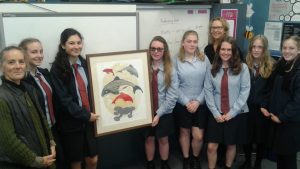 Representatives of the 2017 Kāpiti College Eco Action group with the taonga.

In 2017, Kāpiti College Eco Action Group was chosen as the initial recipient of the Taonga o Kaitiakitanga. Choosing the Kāpiti students recognised the way they had been advocating for local water issues in their wider community, raising awareness of endangered habitats and species and organising ongoing beach clean-ups locally.

The students valued what the artwork stood for.

“It is a really cool responsibility to take care of this beautiful artwork . . . It symbolises all that we, as an Eco Action group stand for. We treasure the environment of New Zealand, just as we will care for, continue to admire and be inspired by this amazing piece of art!” – Aliesha Taramai, Kāpiti College Yr 12 student in 2017

Koraunui School welcome the taonga with a whole school pōwhiri

In 2018, Kāpiti College students travelled to Koraunui School in Te Awakairangi to pass the taonga on to students and teachers. Koraunui School welcomed the taonga and the students with a whole school pōwhiri. In this case the taonga recognised the contribution the school had made to the well-being of Stokes Valley streams through ongoing monitoring, planting and by supporting fish migration. The school had led a bioblitz, inviting all the community and other schools. The taonga also acknowledged the way Koraunui teachers generously contributed their knowledge of sustainability by hosting other teachers in their school. 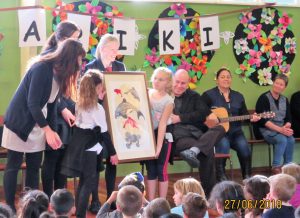 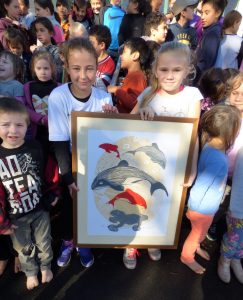 Peninsula Early Learning integrate the taonga into their art exploration

Peninsula Early Learning was a natural choice to receive the artwork in 2019 because they already had a strongly creative approach and upon receipt of the artwork the tamariki immediately started their own Māui dolphin designs among discussions with teachers and parents about endangered species. 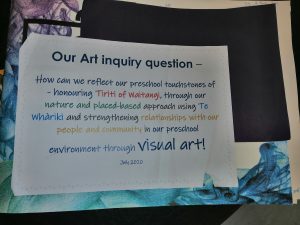 This coincided with the centre engaging in an art inquiry to reflect their touchstones of honouring te Tiriti o Waitangi, through a nature and place-based approach, using Te Whāriki Early Childhood curriculum and strengthening relationships with people and community.

The inquiry resulted in a series of art installations developed with the community and included learning outcomes for the children of being able to work on joint projects with one another and with whānau, exploring a variety of art mediums and seeing projects through to fruition. 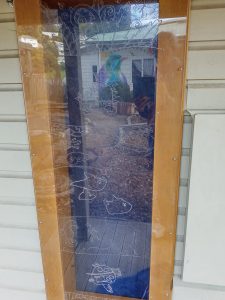 The etched window designed with Robin Christie incorporating artwork in response to the Taonga o Kaitiakitanga. 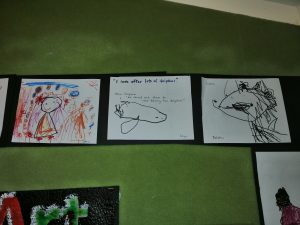 Some of the Peninsula Early Learning Centre children’s dolphin artwork.

The first of the centre’s touchstone artworks involved Robin Christie from Childspace working with the tamariki to incorporate their designs into an etched window. This included some designs developed in direct response to the Taonga o Kaitiakitanga artwork.

In addition, receiving the Taonga o Kaitiakitanga artwork, prompted the teachers at Peninsula Early Learning to explore printmaking with the children. They realised that there were other examples of Sheyne Tuffery’s work located close by: at the school next door and at Wellington Airport. They visited these with their tamariki and also invited Sheyne to visit the centre. This resulted in something that warranted a whole new story (which we will be publishing in 2022).

Haerenga to the Wairarapa

In 2020, children, parents and teachers from Peninsula Early Learning took the taonga on a haerenga across the Remutaka ranges to Fernridge School in Whakaoriori/Masterton. Fernridge School was chosen because of the incredible job they have done of developing and nurturing their outdoor spaces.

The Peninsula Early Learning children made a beautiful card with pictures they had drawn of the artwork itself, other endangered creatures and their desire to protect  living things.

“We have loved [looking after] the Enviroschools taonga and we hope you find it inspiring too.” – Peninsula Early Learning 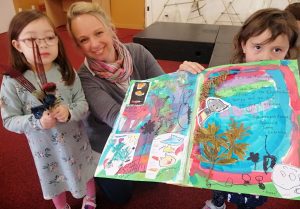 Helena and Aria from Peninsula Early Learning with their teacher Di and the card they made with messages about Māui dolphins and other endangered creatures. 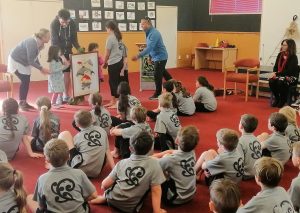 The very empowered students at Fernridge immediately whisked our young presenters off to show them the things they have been looking after in their own school grounds.