But South End School students and parents know it doesn’t have to be that way! Producing less and less waste has developed into a healthy competition at South End and the school has a few tips to share.

By far the best approach to waste management is to not make waste in the first place. It’s just about forming new habits. 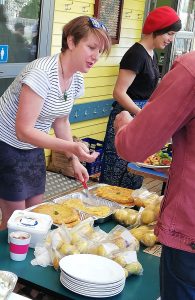 They noted that some of the waste was made up of single use decorations that had simple alternatives. They started by banning balloons and using fairy lights instead. They also made their own streamers out of G.O.O.S. (good on one side) paper which could later be reused and then composted, or recycled.

The parents organising the school’s annual Global Food Festival (supported by Carterton District Council) took up the Zero Waste challenge and engaged their local “Boomerang Bags” team to make bunting which can be reused for other celebrations.

Unfortunately not everyone was aware of the plan and quick action was required when balloons started going up on the fence, resulting in their next tip…

Tip 2: Communication is key – everyone needs to be up to speed with the Zero Waste goal 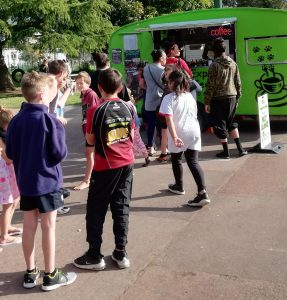 Bring your own cups for a discount at the Coffee Cart!

With around 200 people attending the Food Festival and with 29 stall holders, the Board of Trustee (BOT) organisers had some communication challenges to overcome. When they talked to the regular stall holders about their new Zero Waste expectations, some stall holders were prepared to give Zero Waste a go – the coffee cart offered coffees at a reduced price if people brought their own cup.

Emilie Neubauer, Enviroschools Lead teacher at South End, says the Enviroschools Green-Gold statement – “Sustainability is part of all our decisions and everything we do” – really resonates with the school. So when some stallholders, like the chips and hotdog cart, decided not to participate, and not everyone was happy about not being able to get their usual chips, the team stuck with their Zero Waste kaupapa.

Tip 3: If you “think healthy and home baking” you are likely to create less waste 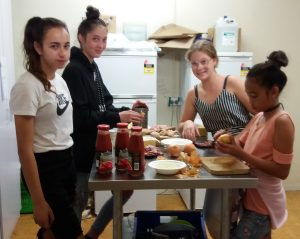 The Year-8 disco organisers found that thinking healthy made life easier for them. The school is a water-only school, so no fizzy drinks were offered at the discos. Instead students drank water from re-useable cups.

The organisers discussed making their own pizzas instead of relying on the principal’s usual drive to Masterton to purchase them from Dominos. They realised that not only could they reduce packaging by making their own, but they could also reduce the carbon footprint from the 30km drive. Although they didn’t feel they had the time with the busy school calendar to manage making the bases, they compromised by purchasing pizza bases in bulk packs and then adding their own toppings.

“You still can have fun without the waste. It is not what you eat and drink [that makes a good disco] but what happens – more about the people – partying together” –  Students Maya Dijkstra and Amber Babot.

Tip 4: You can do your own dishes you know!

The BOT organisers of the Food Festival made a plan for doing their own dishes so there would be no throwaway plates. First they minimised plates by having lots of finger food. Then they borrowed crockery and cutlery from the local second hand store, for a nominal fee and encouraged people to use the same plate for a selection of different dishes.

They set up two washing up stations for dishes managed by students and adults and towards the end of this event the staffroom dishwasher was used.

Ma tini ma mano ka rapa te whai – By many will the work be accomplished.

Not everything went according to plan in these events, providing both students and parents with some good learning opportunities. The team at the Food Festival ran out of reusable plates, bowls and cups. The cups available weren’t large enough for the size of the coffee cart’s smoothies, and some single-use plastic cups and straws ended up being used for part of the event. 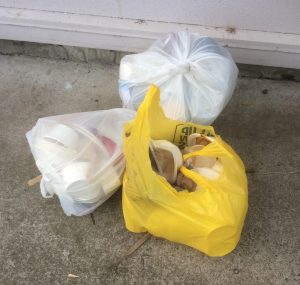 Solutions are starting to emerge. Te Kura o Papatūānuku – Wairarapa Earth School, (a charitable Trust that works with the school to foster science and technology through hands-on garden-based learning), would like to set up a ‘bank’ for Zero Waste events where the public can borrow crockery, cutlery and bunting for their own Zero Waste events.

A small pile of waste at the end of the Global Food Festival shows just what good habits can achieve.

To the students, teachers, parents and BOT at South End School, the commitment to being an Enviroschool is a serious one. When they think about any aspect of sustainability, they think about how it affects all areas of school life.

Students have been actively involved in learning about waste and coming up with solutions since they first became an Enviroschool in 2012. They have worked with their Enviroschools facilitator to audit their waste and the teachers have used the Enviroschools resources to support student learning.

Other aspects of sustainability they have included in their Enviroschools journey include sustainable buildings (they built a garden shed), developing a food forest, and creating murals.