The idea for Raglan Kindergarten’s adobe project started in 2016 as an interest of the Head Teacher, Isabelle, who was inspired after visiting other centres with adobe creations in their environments. Further food for thought came about through speaking with respected local residents (permaculture practitioners Rick Thorpe and Liz Stanway) about their travels and experiencing environments that reflected local stories. From here the idea to build an adobe wall that reflected the kindergarten’s pepeha was born. 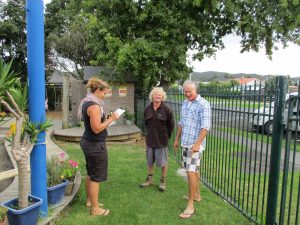 EXPLORE ALTERNATIVES:
After a little inquiry out within their local community an expert on adobe building was sort. Guy Toxward was a wealth of knowledge for the kindergarten in the initial stages of planning this project and sourcing the local rich red clay for making the earth bricks.

It was at this point that the tamariki and their whānau became involved. Lots of discussions were held with the tamariki around constructing walls. 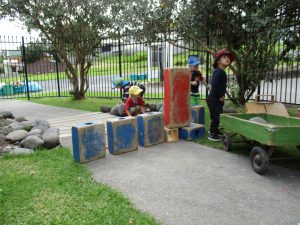 The tamariki explored how bricks were laid and tested making model clay walls themselves. Large wooden blocks were also an interest outside during this time as the tamariki further developed their ideas around the process of construction.

A lot of testing was undertaken with the tamariki to build their knowledge and understanding around what the process may look like e.g. laying foundations and what was needed to make walls strong. 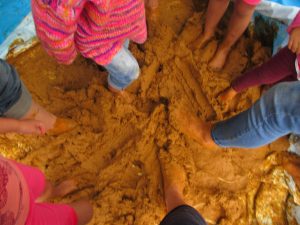 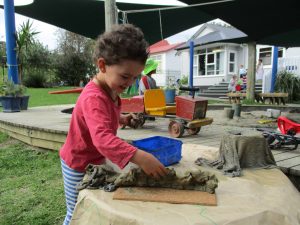 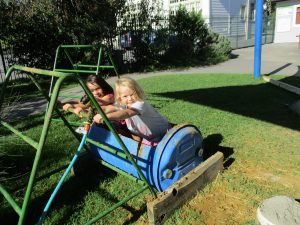 With all this rich learning in place it was time to bring in the beautiful natural resources sourced locally for making the earth bricks. The tamariki, teachers and kindergarten community thoroughly enjoyed the process of getting in and ‘puddling’ the clay (the first part of the process) before adding sand, pumice and water to the mix. What a delightful ooey gooey sensory experience!

The earth bricks were made and laid in stages and different teachers, tamariki, whānau and wider community helpers were involved throughout this time. 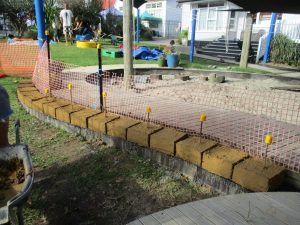 The first lot of adobe bricks are laid.

In November 2016 a celebratory dinner was held to bring the kindergarten community together to complete the final stages, plastering and embellishing the adobe wall. With the support of their teachers the tamariki had even developed a plan for the mosaic process. 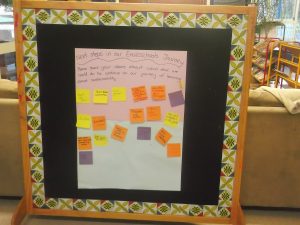 Considering next steps for Raglan Kindergarten.

The celebratory evening was also a great opportunity to receive feedback from the community on what they thought some next steps could be on the kindergarten’s Enviroschools journey towards being recognised as ‘Green-Gold’. The collaborative nature of the project and sharing of ideas brought everyone together, fostering a strong sense of whanaungatanga and manaakitanga. The tamariki were true hosts, sharing pears harvested from the kindergarten trees to their community helpers. A strong sense of pride and empowerment was evident by all those involved. The sheer joy on the faces of the tamariki was a sight to behold.

Ultimately the sustainable and ecological learning that came from the experience for everyone was priceless. The tamariki really embraced and took ownership of the project with the support of the teachers, whānau and the wider kindergarten community. This truly is a project that encapsulates ecological building, nature and culture in its design and construction on many levels. 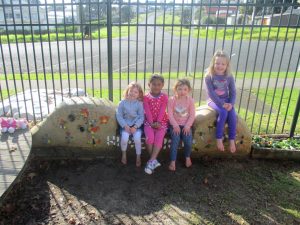 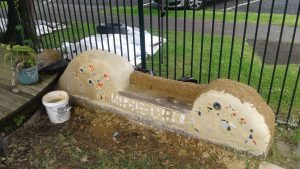 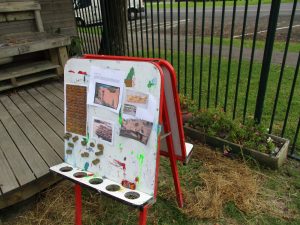 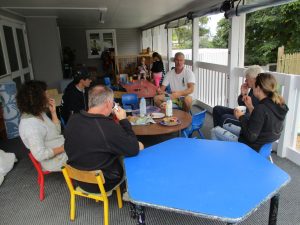