BestStart Pipiwai Kindergarten awa journey began shortly after they became an Enviroschool in 2019. Teaching staff used the Enviroschools Action Learning Cycle to identify the ‘current situation’ and create an idea of what the possibilities for the future could be. 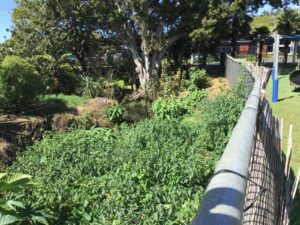 What weeds were along our awa?

Andrea Chittock, the Enviroschools lead teacher for BestStart Pipiwai Kindergarten, had for many years observed the awa and noticed how it had changed over time. She spoke of how, when she first began teaching in a nearby centre, she frequently saw tuna/eels and ducks in/on the awa. Sadly, this was no longer the case. The tuna and ducks had disappeared, which was an ongoing concern for her. 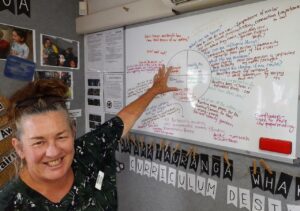 Becoming an Enviroschool meant that they received guidance and support from their facilitator, Judy from Northland Regional Council (NRC), and access to a range of resources. What a great time to start exploring ways to engage with their awa!

The first step identified was to research the awa. Questions that arose included: What connections do local iwi have to the awa? What is the correct name of the awa?” and “What is the significance of this awa to local hapū?”

Although they have been told the awa is called Waitaua, finding further information has proved quite difficult so a goal for them is to dig more deeply into this. 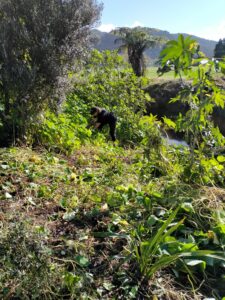 With the support from Judy and Susan (Enviroschools Northland Regional Coordinator) the kindergarten tested the quality of the water. They then looked at what weeds were growing on the banks, how to identify these and remove them. Weeds that needed clearing included a number from the Solanum family including thorn apple and woolly nightshade, as well as invasive vines such as nasturtium. Fortunately, a team from the Whangarei District Council came and assisted them in the enormous removal job!

Once the weeds were cleared, the kindergarten team began talking to experts (including Plantpro who had whānau attending BestStart Pipiwai Kindergarten) about appropriate native species to plant and how many would be needed. They applied for and were successful in gaining an ELF (Environmental Leaders Fund) grant through NRC for $1,500. This was put towards plants for their first whānau planting day. 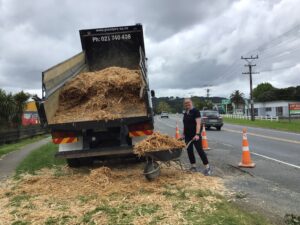 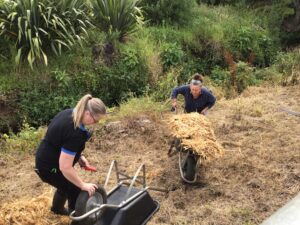 A barrow load of laughs and mulch. 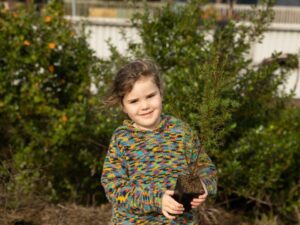 Taking responsibility for a manuka – one of the many native plants to replace the weeds.

Drawing on whānau and their local community, their kete of knowledge, skills and expertise began to fill up. Together they purchased plants and mulch and had a successful whānau planting day. When the plants were delivered there were loads of conversations between kaiako and tamariki about what these special rākau were and why they had been chosen and how this action of planting was going to help the awa.

Things were going well – trees and plants were thriving but so were the weeds! This created a lot of discussion with the tamariki, and they came up with many wonderfully creative ideas on what to do about the problem, such as, “Get all our Mums and Dads together and they can come and dig them all out!” As a result, another maintenance and planting day was in the planning to coincide with Matariki 2022.

BestStart Pipiwai then reached out to other agencies for assistance. Forward Whangarei (who provided more plants to go along the banks) and Danielle Hancock from Biosecurity NZ (who just happened to be holidaying in the North). Lead Enviroschools teacher Andrea, who knows Danielle well, quickly put her to work weeding.  She also provided expert advice and tips on how to maintain the area around the awa and keep the weeds at bay.

When tamariki see ducks on the awa they exclaim, “Andrea come, there’s ducks!!” as this was an agreed success indicator. 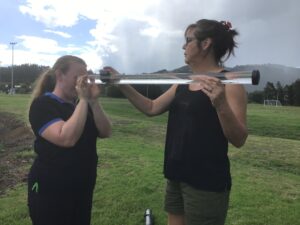 A real highlight for the whole team was their involvement in the Northland Regional Council WaiRestoration tour. This tour was organised by the Enviroschools NRC team to showcase how schools are restoring their local awa.  Teachers and Enviroschool Facilitators, most from the Manawatū-Whanganui region, came to Whangārei to experience this. The Enviroschools involved ranged across all sectors (Beststart Pipiwai was the only ECE). All of these Enviroschools are at different stages of their journey.  They have taken responsibility for a waterway either bordering the grounds or on a local farm.

Being involved in this WaiRestoration mahi helped build a new connection – with Sara, a pest plants expert at NRC who is now onboard supporting the Waitaua awa restoration at Beststart Pipiwai.

Collaboration with the centre directly beside them has now developed. This neighbouring Early Childhood Centre is also an Enviroschool. They had their own concerns and experiences to share about the condition of the awa. They told their story of how a kaiako noticed a strange substance floating in the awa. She then sourced the cause and encouraged the culprits to clean it up (which they did quickly). This experience again provided many learning opportunities for tamariki, particularly around the importance of being a kaitiaki of their taiao.

Beststart Pipiwai Kindergarten’s awa journey is constantly evolving and as they move forward with their mahi, they are involving more kaiako, tamariki, whānau and kura. Tamariki have been engaged in a number of ways through this journey. Kaiako continue to talk to them about the awa, about the weeds and the plants that they are choosing to restore the banks. These conversations have been a great way to teach tamariki kaitiakitanga and manaakitanga. During mat time kaiako help tamariki to understand the concepts and break down and have discussions about the stages of the project they have reached and what was happening next. They talk about why they need to be kaitiaki of their Kindy and awa. 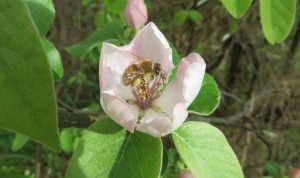 Bee Aware Month is celebrated each September creating a buzz around plants.

Kaiako have also linked the learning to other events. One experience was a beach clean-up to celebrate World Ocean Day. They gathered on a Saturday to pick up rubbish from a beach in Onerahi. This led to discussions about keeping the awa free of rubbish. Bee Aware Month is celebrated at the Kindy every September and this year there is a lot of conversation around different plants needed to help bees and comparing them to the plants needed for the awa.

There is a long-term vision for a healthy awa and everyone knew it had to be manageable, authentic and give others in the community opportunities to contribute and lead the journey.

“Each time there is talk about our awa, tamariki are able to respond about the need to keep it clean, “to look after the fish”, “to keep the water clean” – said kaiako Andrea.      “While writing this, one of our boys asked what I was doing, and I said I was telling him that I was telling you all about how we were keeping our awa clean and his reply was “that’s a good thing”.

There are two tamariki at the centre who pray each night for the plants and the awa and this has become a specific part of their nightly routine.

Where to from here?

The next steps identified are:

He Rau ringa, e oti ai — With many hands the job will be finished 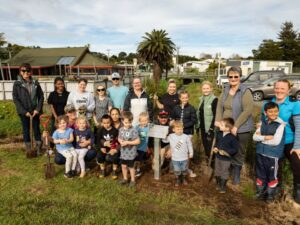 Time to pause, reflect on achievements and celebrate. 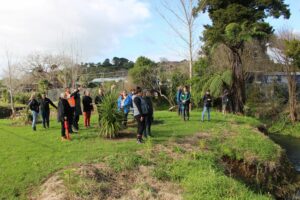 Visitors are shown planting next to the awa.