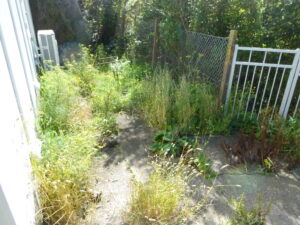 The neglected area before work started.

Te Ara a Tāne (the name given to the area between Paparārangi Kindergarten and Paparangi School) has been fundamental in rebuilding and strengthening the relationship between us, something that has been difficult to maintain during the last few years of Covid restrictions. The name symbolises the pathway between learning communities and also links the story of Tāne as Atua of the ngahere and his baskets of knowledge that he brought back to Earth to create a more sustainable future.

Our aim was to redevelop an unloved and barren area of kindergarten that is used by whānau and the community to access the school and kindergarten. We wanted to celebrate the whakapapa of our whenua and gain more knowledge and understanding of our history and be able to share this in a meaningful way with our community.

Establishing a ngahere that supported our local wildlife and biodiversity and allowed tamariki to see themselves as kaitiaki of this area was also a goal.  Tamariki would also be able to see the trees and bushes grow as they continue on their own learning journey from the kindergarten to school. 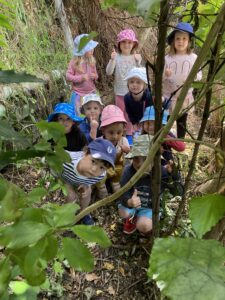 From the start of this project, we have included both the ākonga from the school and kindergarten in planning, designing the space, painting the murals and planting the area.  The Earthwise Action Fund allowed us to hire a landscaper to dig and remove the concrete pad, get rid of the weeds and put down topsoil and bark ready for planting. This was competed in the July holidays, 2022.

A working bee was held with whānau and an amazing amount of work was done to clear a new path and begin planting with native species.  We also bought the native plants from the Wellington Bird Rehabilitation Trust that sells them as a fundraiser for their mahi rescuing injured birds.  Whānau are now also gifting us fruiting and native trees to add to Te Ara a Tāne as a gift when their child leaves kindergarten.

Over the past few months work has been done on the murals which will go on the wall of the kindergarten above the planting.  Paparangi School did 2 murals and held a school wide competition to design and paint them.  The first mural shows Seton Nossiter Gully which borders the school and kindergarten and includes Belmont Stream which is our local awa.  The second mural is of the Belmont Viaduct which once ran over the gully in the 1860’s when it was built was the highest wooden rail bridge in the Southern Hemisphere.  The train line opened up the Horowhenua for cattle exports and took soldiers to Wellington to go to WW1. 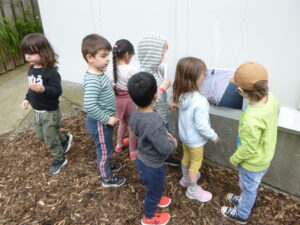 Helping to design the murals. 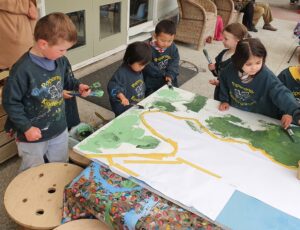 Tamariki at Paparārangi Kindergarten contribute to the mural painting. 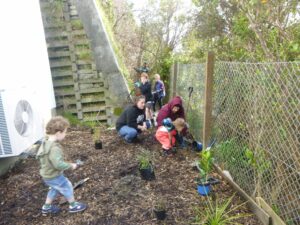 Working together to plant along the fenceline.

Papatūānuku and Ranginui who will frame the wall with the murals between them were started by whānau at the working bee and a mural showing the kindergarten, our local papakāinga and Te Whanganui a Tara was created by the kaiako and tamariki at kindergarten (two taniwha will be added later). Tamariki now visit Te Ara a Tāne weekly as part of our programme and have a real interest in noticing the changes in the plants, making birdbaths and weeding the area.

An unforeseen outcome of the closer connection between the school and kindergarten has been numerous conversations with the teachers about other ways to share knowledge and support transitions for tamariki and whānau between our learning communities, especially using a Te Ao Māori framework and the Enviroschools Transition framework. 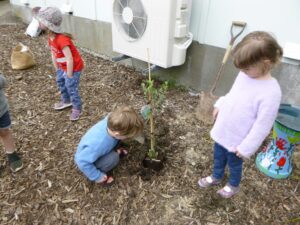 This feijoa tree, gifted by whānau, is carefully planted. 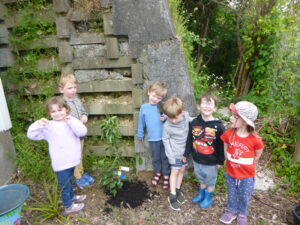 Tamariki look pleased with their efforts to plant fruit trees.

This is work we will be undertaking next year as we begin the next part of the project by building a waharoa that represents the Kaupapa and kawa of each setting.

We had hoped to have the wall painted and the murals up by the end of the year, but we have been hit continually by teachers and whānau with COVID and bad weather on the times we had pencilled in to paint the external wall!

“Thanks so much to Earthwise and Enviroschools for the funding to move ahead with this. We feel very privileged to have been chosen and want to acknowledge how special this project has been for our communities.” – Elizabeth Lee, Paparārangi Kindergarten 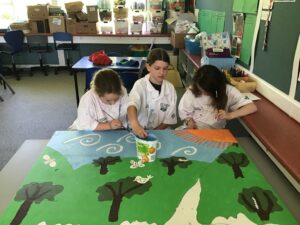 Paparangi students work on the panels showing Seton-Nossiter Gully and the Belmont Viaduct. 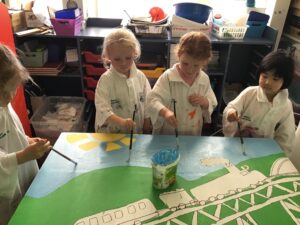 Paparangi-School ākonga work on the blue sky of the mural. 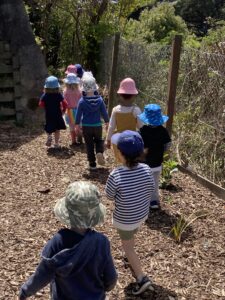 Off on an adventure in Te Ara a Tāne. 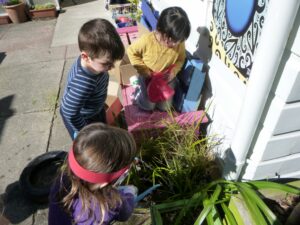 Tamariki caring for their plants.