Westmere School has a small Enviro team of 14 that has been running now for over 5 years. They have worked on a number of projects over the years including predator trapping and worm farms at the school, along with organising special events for Conservation week and participating in plantings at Bushy Park Tarapuruhi.

A project close to their hearts (and feet) is the redevelopment of their very own nature walk within the school grounds. They have been working on it for the last 2 years.  A trapping project was started to identify what pests might be in the area and reduce the numbers, with the long-term goal to increase the native birds and overall biodiversity of the area.

Phoenix expressed this by saying, “We want to make this a better place.” 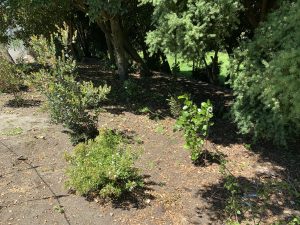 Students have begun native tree planting in the area last year to support the bush regeneration and encourage native birds. They want to create an area where children can appreciate the environment as well. This year they decided to beautify the nature walk even further and discussions were had about creating a visual art mural to be enjoyed by students and the wider community.

This was made possible with funding through the Pat Kelly Enviroschools Action fund, administered by Horizons Regional Council.

Tina Drayton a local artist from Studio86 was commissioned by the school to collaborate with students to design an enviro themed mural. Three students, Libby Walker, Asher Hodson and Phoenix Campbell, from the enviro team researched some ideas and sketched ideas of flora, birds, and other fauna to provide a base for Tina to work from. 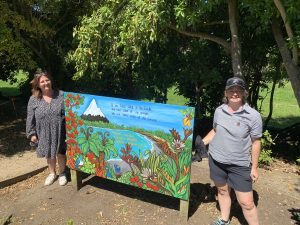 Using the students’ ideas, she created two murals that connected the local environment and the outcomes of the long term project to restore the nature walk.

The mural was inspired by the local landscape and pūrākau including references to the battle of the mountains, Ruapehu and Taranaki.

“I thoroughly enjoyed working the kids on creating a mural that encompassed all perspectives of the area,” said Tina, “although it would be great next time to be able to get the kids more involved in the hands-on work in creating the mural. Covid made it a bit harder to make that happen.”

Tina, also a mum of the school, commented that every school should be part of the Enviroschools programme. The value of the learning that her children bring home is reflected in choices she now makes herself, with every small difference leading to larger changes overall.

“We wanted to add some messages to our murals that kids would understand.” said Libby, Asher and Phoenix. 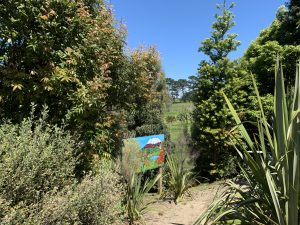 The second mural nestled in the bush alongside the nature walk.

Dr Seuss says it perfectly they think.  “Unless someone like you cares are whole awful lot, nothing is going to better, it’s not.”

The school thinks it is important for tamariki to learn what kaitiakitanga is and the importance of the interconnectedness. The whakatauki below was incorporated into the final murals.

As everyone was enjoying the beautiful murals and talking about the process, what they have achieved and where to next, they saw a kererū fly overhead and heard a grey warbler/ riroriro singing in the trees. This excited the students about the mahi that had been done and the impact on the biodiversity. It was affirming to see and hear manu using the area. 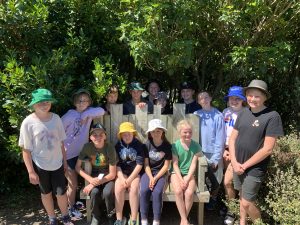 Future plans the students have include labelling the trees along the bush walk, the possibility of building of bird and wētā houses, additional planting and creating some artwork made from recycled materials to enrich the area further.