Growing a gully-aware community and outdoor learning space at Marian

Kirikiriroa/Hamilton is known for its inter-connected gully systems that provide biodiversity sanctuaries and corridors. In the past many of these gullies have being weed infested dumping grounds, however over the last 20 years a ground swell of local people has recognised their value and taken responsibility for restoring these important remnants. Marion Catholic School students and whānau have been part of this raised awareness and understanding and have made their own contribution through their learning and action.

In September 2020, Marian Catholic School in Hamilton reflected at Enviroschools Silver, and during this process the school identified that the gully area needed further mahi. A plan formed to develop an outdoor space of learning and a way to increase biodiversity in the school – but how?

Rejuvenating the gully was a ‘Next Step’ that has been in the minds of many for several years. The gully was first planted in natives over 17 years ago with plantation pines removed and a large grass-covered play area remaining. There have been subsequent plantings over the years by groups of students.

In March of 2021 Marian students worked with their Enviroschools facilitator, Alex, and class teachers to create a vision and plan and design how the space could look and what would need to be done. This was achieved through mapping, brainstorming, and researching native plants and animals.  Students used local resources like the Hamilton Halo’s Gardeners Guide and Predator-Free NZ Lizard Garden Guide to learn about plants that would provide year-round kai for native manu/birds like tuī and korimako, and how to create habitats to make the gully mokomoko/lizard, insect and pekapeka/bat-friendly. 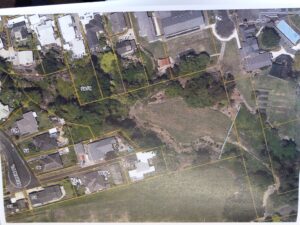 The students also planned to incorporate an outdoor learning room, rongoā plant species in the ngahere, hut building areas and pathways. A special memorial garden for Greg Jordan, who began the native planting in the school gully many years ago in his role as caretaker at the school, was an important element in the design.

The area already had some native plants. The weed infested areas and a large grassed area provided potential for extending indigenous planting and creation of learning spaces. 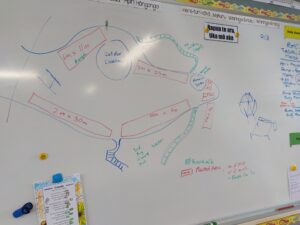 Students mapping area for planting to work out number of plants needed and cost.

After the initial designs were agreed upon, students paced out the areas to be planted, created plant species lists, and worked out the number and cost of plants needed. This work was submitted as part of a successful Waikato Enviroschools funding application that allowed the project to go ahead, and before you could say ‘grab a spade!’ planting was underway!

In July 2021 staff, students and whānau at Marian Catholic School got stuck in and planted 600 native plants in their gully space. The whole school took part in the planting. 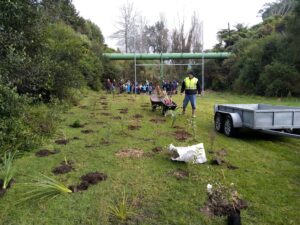 Laying out the plants reading for planting.

Starting in the early hours on a very cold, foggy morning, plants were placed out in accordance with the students planning maps, and spades and mulch laid out ready to go. Older students supported younger ones with digging the holes, so small hands could plant their tree. Students were shown how to dig the right size hole for the plant, how to ‘tickle’ the roots of the plants and how to do the ‘possum test’ to ensure each plant was firmly in the ground. Mulch was then spread around to create ‘blankets’ for each plant. 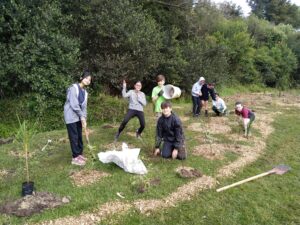 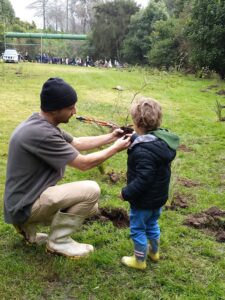 Mokopuna of the late, treasured caretaker, planting kōwhai in the memorial garden.

In the memorial garden space for the late Greg Jordan, his son Ryan (a current teacher at the school) and grandson, planted kōwhai and porokaiwhiri in his honour.

The mahi continued in spring with the students encouraged to take time to ‘arohia te taiao’ – notice nature. Students celebrated the warmer weather by working in the gully, mulching, and releasing the plants from weed growth.  During lockdown, links were made with their learning in the school ngahere with students sharing how they cared the environment in creative ways such as making bird feeders.

With the return to school in December the mahi continued, with a group of staff enthusiastically giving their time to tidy up around the young native trees – hard work and lots of laughs!

With all the ups and downs during the Covid 19 pandemic, the school faced challenges to continue with the rejuvenation work, but they persevered and in February, a special blessing ceremony was held to open the memorial garden, with family of Greg Jordan, staff and students involved in the initial planning of the gardens taking part. 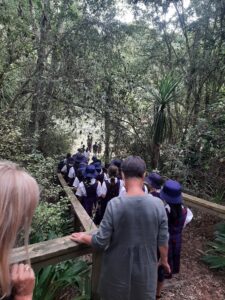 Staff, students and community members head into the gully for the memorial garden blessing. ceremony 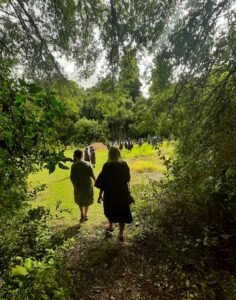 Entering the newly planted area, framed by the rākau.

Students spoke of the work Greg had done, saying the gully had provided an opportunity to “learn and develop a greater appreciation for the environment”

“Greg Jordan was a great character and passionate eco-warrior who passed away on 9th Feb 2020. Part of his legacy is our school gully, where he tirelessly worked and inspired others to replant and restore the land to its native origins. Greg’s work continues and this week our community is honoured to unveil his memorial garden and custom-made ‘surfie’ seat.” – principal, Mrs Debra White.

Greg’s family and representatives from across the school and whānau community were present for a very moving ceremony that included karakia from students, a special blessing by Father Darren and tribute from Marian Catholic School principal, Mrs White. 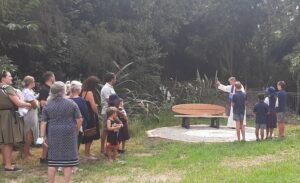 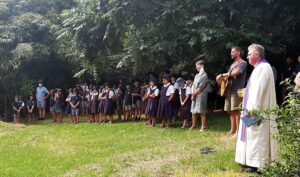 A waiata is sung.

‘Toitū te whenua, Whatungarongaro he tangata – The land remains when the people have disappeared.’ – whakatauki quoted by Principal, Mrs White, that considered the long-term

Work will continue with additional planting and mulching and maintenance. Teaching staff will plan together to create learning units on rongoā, pest management and biodiversity to utilise the taonga they have created.