Last year Toby was involved in a riparian restoration planting pilot as part of the Living Water Project in the Ararira Catchment, Selwyn. The school focused on a 50m stretch of a waterway near the school to plan and implement as the students saw fit (in line with the project outcomes). Toby was the team leader for planting, taking on this leadership naturally. The team researched into which plants to use and why, considering both the value to the water quality and the ecosystem services they may provide. Toby took this job seriously and conducted in-depth research. The species list and planting plan (as shown below) was submitted to DOC and was subsequently included, unchanged, in the formal proposal to Selwyn District Council.

Toby demonstrated his understanding and passion for his role as the plant consultant when he explained to me and the DOC project lead that he had purposefully selected native plants that would out-grow and shade the exotics on the riverbank  based on the project outcomes to restore a biodiversity corridor. Toby’s original plan also included a request to remove some exotic trees. When the adjacent landowner said he wanted to keep them, Toby used his research skills, plant knowledge and passion for the project to think laterally about natives to complement them.

That wasn’t the end of Toby’s role on the project, on the planting day itself he led his team in ensuring the contractor followed the planting plan they designed. 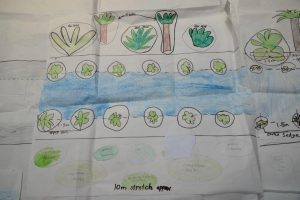 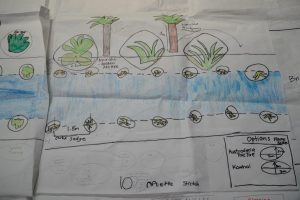 The students also got the chance to share the project at the Environment Canterbury Youth Zone Committee meeting that happened to be the day after the planting. Again, Toby stepped up and was able to explain the project outcomes, planting plan and species list to the assembled group of adults. He explained to the audience why he had chosen Carex secta on the margin to filter any runoff, shade the waterway preventing macrophyte growth, provide habitat for fish and stabilise the bank. 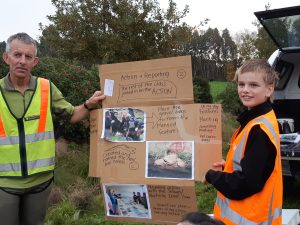 Toby sharing his work, alongside the DOC Project Lead, to a group of teenagers investigating water on the Untouched World Waterwise camp.

Later in the year Toby volunteered to share his work alongside the DOC Project Lead to a group of teenagers investigating water on the Untouched World Waterwise camp. Despite being the only one representing the team, he spoke well and was able to explain the reasons behind the action.

“I took my Waterwise group (made up of 24 young people aged 16-24) to a site recommended by Robin Smith (DOC) where they could see a riparian planting project that was transforming a rural drain. A student from Springston Primary, Toby, was asked to share the story of the work his school has done in partnership with Living Water. This was quite a daunting thing to ask of a primary aged student to speak to a large group of teens and young adults. Toby was superb and thoroughly impressed the group with his passion, knowledge and understanding of the processes needed to get to where they are today. I truly believe Toby demonstrated the depth of understanding I wanted the young people to reach; his talk was a wake-up call for those young people!” – Jocelyn Papprill, Untouched World Waterwise Camp Facilitator.

What really motivated me to enter Toby for this award is that just last week at the YHA Green Footprint planting,  a year on from his role as the plant consultant on the above project, he was talking to Keely, a Selwyn District Council park ranger and identified a number of the plants we were planting before discussing the values and ecosystem services these plants provide. Keely, SDC ranger observed “You know your plants, I’m impressed!” to which Toby humbly replied, “No, I only really just know a few”. This connection between learning and application of knowledge after such time really shows Toby is something special!

“The NZPCN Council are really impressed with Toby’s efforts in communicating the importance of native plants and the great work he is doing in the restoration space.” – Dr. Catherine Beard, Science Advisor, Ecology, Terrestrial Science Unit, Department of Conservation (NZPCN Awards convener)

I would like to acknowledge that although Toby took a strong leadership role, all the student ‘experts’ led aspects of the Powells Road project and the rest of the year groups helped when it came to planting action.

Teachers, Allana and Alice were committed to the project and wove the project inquiry into the formal curriculum and through their dynamic teaching approach made the most of the opportunities. Living Water project lead Robin Smith and his team of consultants and contractors opened the door for Toby to lead meaningful action in his local environment.

In response to receiving the NZPCN Young Plant Conservationist award Toby remarked, “it feels like a big deal because it’s for the whole of New Zealand, but it was only a small project. I guess, if everyone does a little bit it becomes a big action”. 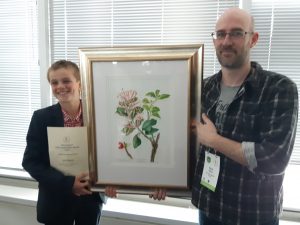 Toby also got to meet previous winner, Cory, who has gone on to pursue his passion for plants with an apprenticeship with Rewi Elliot at Otari-Wiltons Bush.