The day started with around 100 people (over half children and teens) planting along Hape Stream opposite St Francis school. There were about 100 natives grown by St Francis students to be planted as infill planting. The school used the opportunity to get people shifting the old compressed and rotted down bark from their playground to mulch the whole area. The predicted rain held off and there was a real warm, sharing community atmosphere. 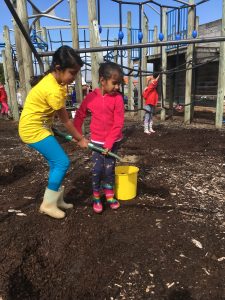 Students dig in to remove rotted bark from the playground to use as mulch around native plants. 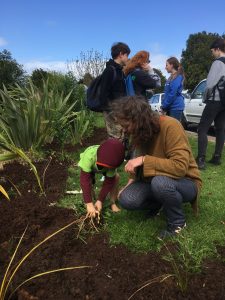 At 11.30am the students held a rally outside the High School and followed it with a march past the council buildings, down the main street and into the Grahamstown hall for a concert.  Over 300 people showed up for the march, and when they got to the CBD the students directed everyone to link arms and form a human chain along the main street showing where the sea levels are predicted to rise if greater action to reduce greenhouse gas emissions is not taken. As the march reached the Grahamstown hall and people could get under cover it started to pour with rain as if Ranginui had blessed the event by holding off till then.

The three-hour concert finale opened with the High School kapa haka group and featured local musicians and speakers.  The final band gave everyone a chance to let their hair down and celebrate a really successful community event and the energetic and empowered young people in this community.

You can read about the lead-up event “Nature Needs Us” here.

Banner Photo: Students join with the community in Thames to share messages about climate change.