During weekly 1-hour “Inspire time” slots in 2020, students at Kuranui College worked with their teachers to explore their own interests. Although the school has an Envirogroup, the opportunity to use allocated school time was vital to this project’s success.  It also meant that students beyond the Envirogroup participated. 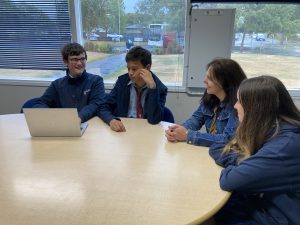 Prior to starting the “Inspire Time” slots, Kuranui College teachers surveyed students to see where their interests lay.  A number indicated an interest in environmental projects and in Term 2 2020, teacher Rachel met with the interested students to discuss potential projects. They decided to start with recycling at school. This appealed to Rachel as she had been recycling at school on a small scale herself and could see that a school-wide system was really needed.

Teacher Rachel facilitated the initial discussions but beyond that the students took the lead.  They found out that Kuranui College sends approximately 132 cubic metres of waste to landfill annually, a massive contributor to air and water pollution and taking up valuable space.

The students articulated two main drivers for recycling – to reduce the amount of waste sent to landfill and to reduce greenhouse gas emissions associated with creating new products.

They began by creating their own survey for staff and students and found that there was overwhelming support for the idea.

They could get 45 bins free of charge from Paper 4 Trees and they could get extra kerbside recycling bins from the council. They worked out that they should be able to offset any additional costs of new bins with savings in rubbish collection costs. That was enough to convince Mr Fuller the principal, who gave the project the green light.

“It is awesome to see these proactive students have a big idea, prepare a proposal, lead and implement the change they want to make.” – Simon Fuller,  Kuranui College Principal

Bringing the school on board

The students designed, printed and attached the labelling for the classroom bins, and independently developed video and slideshow material to launch the new system in mentor classes. Their material included facts about why it was important, what the changes would be and the roles people needed to take on. 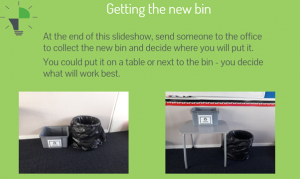 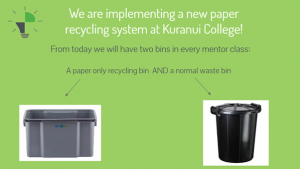 Clear messages to support the changes. 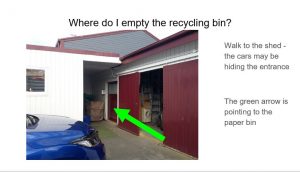 A slide presentation was created to help the whole school understand the school recycling systems.

After the new systems had been up and running for a while the team reflected on the project success and their involvement.

Cameron says “It has been good to be involved in something that has made change happen – our time has gone to good use.”

“I am really happy that people care enough and are putting the effort into doing it,” says Ngakau.

Rachel was surprised and pleased by the relative ease with which they were able to implement a new school-wide system.  People were mostly very receptive to it and now using the bins is embedded (although getting them emptied in a timely way still continues to be a challenge).

“The hardest part as a teacher was encouraging staff to play their part in encouraging the students to empty the paper bins regularly.  This was really important because we didn’t have enough kerbside collection bins to cope if there was a backlog. Despite the challenges we stopped  8.5 tonnes of waste going to the tip last year, saved 68m3 of landfill space and 46.92 tonnes of carbon emissions. And we earned 34 trees from Paper for Trees.”- teacher Rachel

An additional bonus is that the project has promoted discussion among students/staff about other ways they can improve their carbon footprint. Cameron’s mentor class have been discussing riding and biking to school. The staffroom and the food technology room have plastic, glass and paper recycling.

Their principal appreciates the modelling the students have shown and acknowledges Rachel’s support.

“Their whole school recycling system is challenging the thinking and habits of staff and students. They are modelling to the rest of the school community that when you put your mind to it anyone can make transformational change.” – Simon Fuller,  Kuranui College Principal 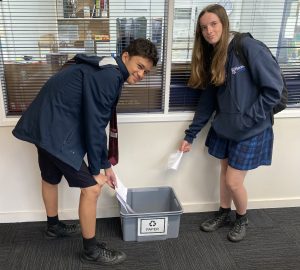 Looking further into 2021 the next stage of the proposal is to add recycling stations in the quad area and bring plastic and metal recycling into school.

Kuranui College became an Enviroschool in 2016 when the principal at the time saw a need for these students coming into the secondary school from feeder primary school Enviroschools to be able to continue to develop their knowledge and passions. The school has an Enviro Club who are keen to extend the work that the Inspire Group have started.