An interesting thing that has happened at Clyde School as part of their focus on waste is that they have been allowed into the staff room and resource room to audit the staffs’ waste habits. This, along with a series of  school waste audits and brainstorms about alternatives has provided an opportunity for everyone to consider good practice and implementing change.

This is their Timeline of events. 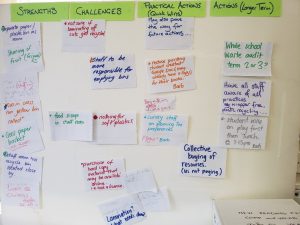 Term 1 – A staff meeting with Enviroschools facilitator, Anna, identifying what they would like to investigate and improve for their school grounds and culture this year. Rubbish was identified and the staff decided to take some action themselves in their own staff areas.

Glass-bottled milk was suggested, along with less laminating, working towards waste free morning teas and installing a kai scrap bucket in the staff room  – all achievable suggestions.

In Term 2 the focus was for the whole school to identify their waste habits through a whole school waste audit. 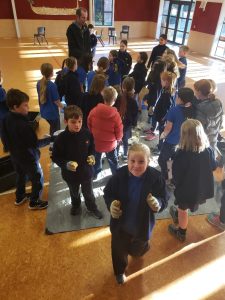 Students carry out the waste audit to help measure the current situation and change.

Each class saved their own waste, recycling and kai scraps for 4 days then spent an hour together with Enviroschool facilitator, Anna, going through their own class rubbish, sorting, weighing and really getting the dirt on what was going on with their waste habits! Communal bins were surveyed too.

One bin was so gross the audit was abandoned on the grounds of safety – maggots and extreme amounts of moldy food were found!

The students on the day of the audit were able to firstly acknowledge that there were some things they were doing really well. In their own class bins, things were pretty ordered, kai was diverted from landfill with bokashi bins and paper was really well recycled, though a couple of classes realised they could do a little better with GOOS paper recovery.

The communal bins seemed to be the real problem for the school.

One communal bin, it was decided, could be removed from a play area outside some classrooms. The idea that good bin and recycling habits inside the classroom were not being continued outside the classroom was the reason for this.  It was hoped that if the bin was removed, then the “one bin for everything” attitude would be dispelled, too.

The students also thought that, if they were to sit and eat at lunch and play time before roaming outdoors, their rubbish would go in to the right bin. Most students also said they just packed their leftovers back into their lunchboxes and took it home anyway.

Another area of concern was the hall kitchen, a communal area where many students, whānau and public use for preparing and cooking food. With only one bin in the kitchen, everything ended up there, and it was up to the caretaker to get rid of the contents of the smelly bin at the end of the week. The senior students audited this bin and decided the action they would take was to let the principal know that they wanted change and that they thought that adding the kitchen bin to the bin monitors’ duties would be an easy task, taking away the job from the caretaker (& looking after him by doing this). They also wanted to install a kai scrap and recycling bin in the hall kitchen. Easy and achievable outcomes! 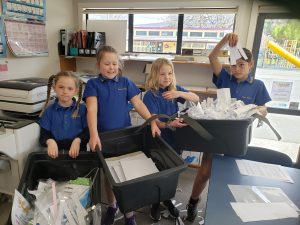 In Term 3 a few students from the Envirogroup decided that an audit of the staff areas was in need. The students diligently spent an hour searching through and identifying some issues that the staff had with their bin and waste systems and habits. Even though a kai scrap bin was in place in the staff room the students decided it wasn’t big enough, as they had found a full kai scrap bin, plus more kai scraps in the rubbish bin. There was no recycling bin in the staff room and they had found recyclables in the rubbish bin.

In the resource room there were 2 bins – one for recycling and one for rubbish, both full however, and quite disorganised. Again, the students identified issues with the size of the bins, but also found creative and easy solutions for the amount of stuff.

“I feel sad. I didn’t think there could be so much paper. I understand why there is so much, but they should probably have a bigger bin.” (The recycling bin was overflowing into the waste bin). – student

“I feel sad, but the solution could be sharing the paper in class.” (GOOS paper found in the recycling bin in the staff resource room). – student 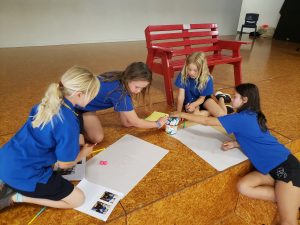 The students came together to identify all the issues they had discovered, assessing the photos taken on the day of the audit. They wrote all of these down on one large piece of paper. On another sheet of paper the students went through the issues one by one and then wrote anything they could think of to help reduce or solve the problem identified.

The next step was to decide what to do with the information gathered, and ideas generated. Instead of presenting at assembly, something Clyde students enjoy doing, they decided this might be a bit confronting and perhaps embarrassing for the staff so instead have requested a presentation to the staff in the staffroom. The video below is showing the first run through of the speech they will present. The video is the first practice of the speech. What you do not see in this however, are the sheets with the problems and ideas written up. A great first practice! 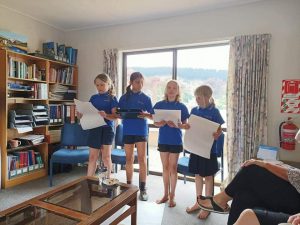 Students present to the staff about their waste audit findings.

The ideas generated were simple yet very effective solutions to the rubbish problems in the staff areas. The care the students took in creating a speech which was to the point, but full of positivity was evident. They want to support change for the staff and want to encourage with positive messages, and a little incentive with the lunchbox challenge!

The great bit about the lunchbox challenge is that this is currently being run with all the students by the Envirogroup as part of their waste inquiry and action.

As Holly stated, “Maybe by looking at the bin, before putting it in, will help.” – such a simple yet powerful idea!

In August the Clyde Envirogroup worked to progress their findings from the bin audit conducted in each class in the previous term and turn these findings into actions which positively impact the school and community.

The group of approximately 24 students had identified parts of school they think need energy put into, both physical, and communication (for increasing awareness and celebrating success) and split themselves into sub-groups to work on each of these areas. 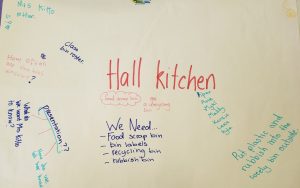 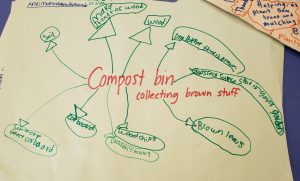 They brainstormed in their groups what their vision is for each of these focus areas, who might be involved, and how they wish to go about their project. Popcorn was shared amongst the group to keep busy brains firing and these empowered students have found the opportunity to share their ideas, concerns and visions immensely satisfying.

“As a facilitator, it is amazing to witness the energy when sitting in a room of eco-warriors!” – Anna Robinson, Enviroschools Otago Facilitator 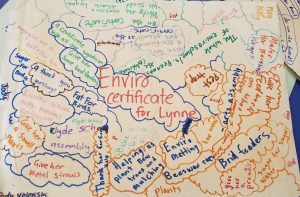 A special certificate to recognise the wonderful ecowarrior, Lynne.

The next time they met, actions were taken on the first steps in their group project. This was to recognise the contribution and commitment of a local environmental champion. Lynne Stewart, who started the “Project Gold” planting under the Clyde bridge with Clyde primary 10 years ago. Lynne lives close by and welcomes students from schools to visit her property that is teaming with bird life and lovely native plantings. She is a true eco-warrior, and passionate about this area we live in!

“We are all on this learning journey together and being open to our waste practices being scrutinised by students is part of that. It is saying actually, we can all do better.” –  Sarah Muller, teacher.

Joe, Clyde School librarian, commented, “After seeing young people in Glasgow speaking up for climate change, it was great to see students at our school challenging the older generations in similar ways.”

Awesome work Clyde Primary. Your dedication to working through your rubbish issues and challenges to make your systems work better for everyone has been impressive to support. I know there are many positive stories going home with students and small, and significant changes occurring, all linked to your Enviroschools vision.