For many of the ten years Kāpiti College has been part of the Enviroschools network, their Eco Action group has involved a small and dedicated group of students and teachers. Now a seachange is in process with students from the college, in close association with their neighbours at Paraparaumu, leading much larger numbers of other students in high energy action to address environmental issues. 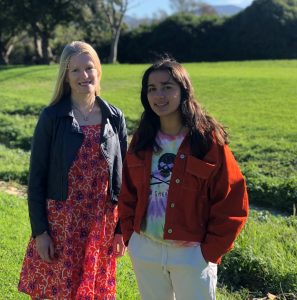 A shared passion for the environment leads to Youth Summit

When Sophie Handford and Maha Fier met in 2017 at the Sir Peter Blake Young Environmental Leaders forum, they were both student leaders of environmental groups at neighbouring colleges.

They ‘clicked’ and chose to work together to run their own forum for youth on the Kāpiti Coast. They wanted to spread awareness of environmental issues and a sense that young people can make a difference.

From this newly formed friendship emerged KEYS – Kāpiti Enviro Youth Summit. “We wanted to give young people hope . . . If they act locally and as an individual, that will have effects on change at a larger scale”, said Sophie.

Youth Summit provides a day of learning focused on wai/water

Wai/Water provided the focus for the first KEYS forum in August 2018. The organisers set about gathering some big names in the environmental world including a local kaumātua, an ecologist, an MFE representative, the Deputy Mayor, a water treatment engineer, marine and waste educators, and a representative from the Sir Peter Blake Trust.

The speakers and panelists came together with over 50 students from the two colleges and a home-schooled group for a day of presentations, workshops and networking. 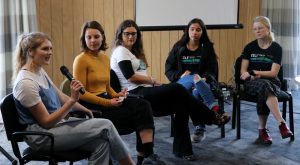 The day generated a high level of energy and discussion about water quality and water use issues with a highlight being the motivation from participants to get involved with taking some action.

Participation in Paraparaumu College’s group has increased and the number of students participating in Kāpiti College’s Eco Action group has doubled since KEYS 2018.

KEYS participants from the neighbouring colleges have since been working together in campaigns such as the Schools Strike 4 Climate where Francesca Griggs and Bree Renwick worked with Maha to organise a rally attended by several hundred people in March 2019.

Students have been actively supporting the Low Carbon Kāpiti campaign including speaking at council hearings and collecting signatures for the petition. 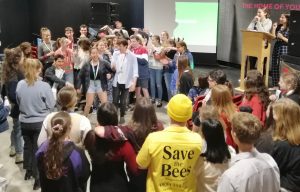 With this level of interest around climate issues, a second KEYS event, organised this time by Maha and Francesca, took place on World Environment Day 2019. A wider range of schools were involved this time around, attracting around 80 students.

The focus was on ‘Fast Fashion’ – the second most polluting industry in the world. As a result students have already started researching the origins of their school uniforms discovering that Kāpiti College’s uniform was not as good environmentally as Paraparaumu College’s. “The youth panel made me speechless as to their energy and desire to make the world a better place”, said a teacher attending KEYS.

“The keynote speakers . . . were able to humanise their pathways from secondary education through to running businesses . . . The summit was so impressive that this model needs to be shared” – Visiting Enviroschools Facilitator.

Sophie Handford on the cover of Forest & Bird.

Taking on the nation

Not stopping there, Sophie has taken her environmental leadership to new heights embracing the role of national coordinator for the global School Strikes 4 Climate movement in NZ and supporting youth environmentalists nationally through her work as an intern for Toimata Foundation.

She says that the strength of the youth support network established on the coast has been pivotal to her being able to do this.

Kāpiti College Principal Tony Kane is seeing ever-increasing value from the leadership opportunities that the Enviroschools Eco Action group offers students and he is a strong supporter of the KEYS events. “We want them (students) to think critically, to care about their community and their future and to be activists for social and environmental justice.”